We are now in December and the tanker market remains surprisingly weak. At the time of writing, rates in the MR segment are around USD 8,000 per day – double the level earlier this autumn, certainly, but still some way below what an MR vessel requires in order to break even. The same applies to crude oil tankers like the Suezmax vessels.

The reason why the market has not yet experienced its big boost is mainly due to two factors:

Outlook
Demand for transport is highly correlated with actual oil production. This, in turn, is driven not only by demand for oil, but also by strategic pricing considerations – by a cartel that plays its cards close to its chest. This makes the tanker market complex and difficult to forecast even in more normal times. The general uncertainty surrounding the pandemic has now made it even more difficult to assess.

Oil production needs to – and will – increase
At the same time, there is still a large imbalance between oil production and consumption. The gap in the summer and autumn months has been between 2 and 3 million barrels per day, resulting in continued large stock withdrawals closer to the consuming countries. Since the end of 2020, OECD commercial oil stocks have fallen sharply and are now well below the five-year average. To meet the growing demand, and also to counter a sometimes very sharp rise in oil prices, the US, China and a number of other countries have also now decided to draw down from their strategic reserves.

This scenario is not tenable in the long term. Withdrawals from both commercial and strategic stocks cannot go on indefinitely – production will have to increase. Having been in the tanker sector for the last 40 years, I can say that, so far, every sharp decline in oil stocks has been followed by a replenishment, resulting in an upward rebound in freight rates. It is my firm belief that this will happen this time too.

It is just question of to what extent OPEC and other major oil producers can hold their nerve. An answer is likely to emerge from the OPEC meeting in early December.

Increased nervousness in the face of new mutations
Turning to the pandemic and its consequences, many parts of the world are now experiencing an increased spread of infection. During the last week, the new Omicron mutation has also been detected in an increasing number of countries. It is not yet clear whether the new variant is more transmissible than the currently prevalent delta variant. However, what is clear is that the spread of a possible new mutation has sparked further nervousness in the oil market, which is particularly reflected in the sharp oil price fluctuations recently seen.

This was my last market outlook. Within a few weeks I will step down and hand over to Erik Lewenhaupt. All the best to you Erik. 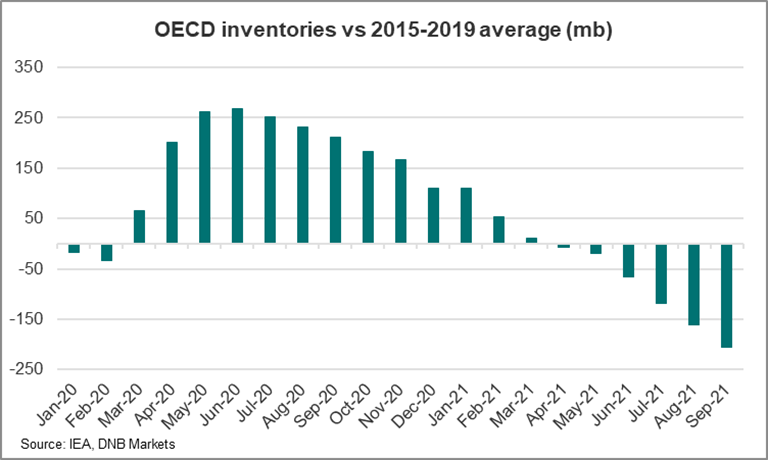