Teleconference/webcast: Presentation of the first quarter, 2015 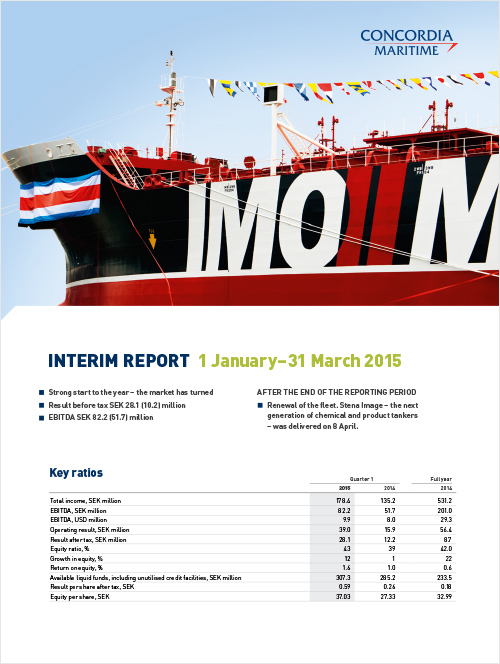 The markets for the transportation of crude oil and refined products remained strong in the first quarter of the year. Demand for transportation was high in most segments, and in some cases freight rates were at their highest levels since 2008. After three consecutive quarters of rising rates, we can now say that the market has turned.

In the product tanker segment, the effects of the changes that have taken place and are still in progress in the refinery area are now being seriously felt, with a shift from Europe to the Middle East and Asia, resulting in longer transport distances. An additional factor is increased exports from the United States. We have talked about this for a long time. We now see clearly that it is actually happening.

When this report is published, we will have just taken delivery of Stena Image, the first of two IMOIIMAX vessels we ordered. Having left the Guangzhou shipyard in China, she is now making her first voyage. Just as was planned, the cargo comprises several different grades of vegetable oils which will now be transported to Europe.

With Stena Image, we start to write the next chapter of Concordia Maritime’s history. The vessels in the IMOIIMAX series represent the next generation of chemical and product tankers and set a new standard in terms of both bunker consumption and load efficiency. They are developed on the basis of a proven commercial concept, but are also further developed and improved. We are already looking forward to delivery of the sister vessel Stena Important. Together, the two deliveries will give a significant boost to our earning capacity.

Looking at the rest of the fleet, we are continuing the process of optimising vessel employment, thereby increasing profitability. For P-MAX tankers, the goal is to concentrate employment on niche trades as far as possible, with the opportunity for premium rates.

It is well known that shipping is a cyclical industry and we must exploit the fluctuations in the best possible way in order to both invest and disinvest. As a complement to the owned tonnage, additional vessels may also be chartered in. The main strategy is for all additional tonnage to be employed in existing systems and pools.

Looking forward, we expect a continuation of relatively strong markets. Although we may notice a seasonal decline during the second or third quarter, we do not expect it to be as deep and long as in recent years.

With generally better markets, a higher proportion of niche trades and more vessels in the fleet, conditions for increased earning capacity are good.