Teleconference/webcast: Presentation of the second quarter, 2015 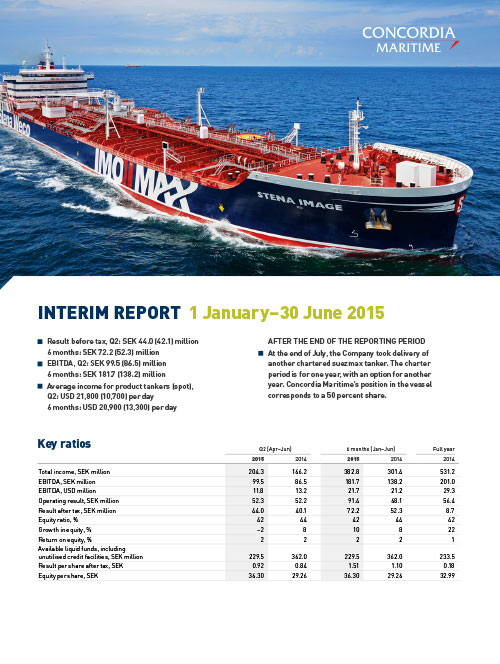 The seasonal decline that usually characterises the tanker market in the second quarter did not materialise this year and the market remained strong instead. Among the main drivers was the low price of oil, which continued to drive demand for oil and oil products. It is worth noting in this context that a large proportion of the oil appears to be being consumed more or less immediately, i.e. not everything is going to storage. This reduces the risk of a sudden and sharp rebound in demand, which might otherwise occur when the oil industry takes oil from storage rather than importing it.

Turning to our own operations, we have continued to arrange the fleet using the strategy we are now working from. Looking at the product tanker segment, over the last year we have put a lot of effort into analysing the market and then concentrating employment on trades and cargo systems where the P-MAX tankers’ unique properties come into their own – trades with specific requirements and conditions. This has been a successful process and it is very encouraging to note that we had essentially all the vessels in the P-MAX fleet employed in this type kind of “niche trade” during the quarter. Three of the six vessels carrying lighter oil products were employed for transportation to and from Australia and New Zealand, with the other three employed between Europe and West Africa. In both cases, the utilisation rate in terms of the vessels’ carrying capacity was high, at between 90 and 100 percent. In a market where small differences in the utilisation rate make a big difference in income, this is a positive factor.

At the beginning of the quarter, we took delivery of Stena Image, the first of two IMOIIMAX vessels on order. With them, we are taking the next step in the evolution of our fleet. The vessels in the IMOIIMAX series represent the next generation of chemical and product tankers and set a new standard in terms of both bunker consumption and load efficiency. The maiden voyagewas from the Far East to Europe with vegetable oil in the tanks. Since delivery, the vessel has been very well received by the market and customers. She is being employed according to plan and has already started to deliver a profit. We are now very much looking forward to delivery of the sister vessel Stena Important. The vessel, which will also be employed within Stena Weco’s pool, is scheduled for delivery in October.

After the end of the period, in late July, we expanded our fleet with another chartered suezmax tanker. The charter period is for one year, with an option for a further year. As with the existing chartered suezmax tanker, our position in the vessel corresponds to a 50 percent share. The transaction strengthens our presence in the interesting crude oil segment. The segment has performed strongly in the first half of 2015 and we expect the market to remain good in the period ahead.

Outlook for the second half of 2015

For the remainder of 2015, we expect a continuing robust market. It is likely that there will be some dips, but we do not think they will be as deep and prolonged as in recent years. Our view of the future is therefore the same as before – with generally better markets, a higher proportion of niche trades and more vessels in the fleet, conditions for increased earning capacity are good.