Strong end to the year

In our previous market outlook, we noted that the tanker market is volatile in nature and that turnarounds can come quickly. And you would have to search hard to find a clearer example of this than the developments in recent months.

When we gave our view of the market back in the 2017 annual report, we predicted a gradual turnaround in 2018. In the interim report for Q1 2018, we then specified that the upturn would take place in the second half of the year. Now, at the end of December, we can see that this is exactly what happened.

From October, there has been a remarkable upturn in virtually all segments. Shipping rates are at levels we have not seen for several years. In September, earnings for a suezmax vessel were about USD 10,000 per day. Now, in mid-December, they are approximately USD 35,000 a day – and this is after showing a slight decline in recent weeks. The graph below shows that product tanker rates have also risen sharply, with a certain lag, of course, as the crude oil had to arrive at the refineries first.

As we noted previously, the upturn is mainly due to OPEC, the United States and Russia having gradually increased oil production since July. The increase is in turn a direct result of stock levels falling and now occupying levels that correspond to the average for the last five years.

OPEC and other large producers have now announced that they will cut production by a total of about 1.2 million barrels of oil per day. The reduction is likely to have a certain dampening effect on the tanker market. In a shorter perspective, we expect the rates to decline from the high levels we have seen in recent weeks. It is unlikely that there will be any dramatic falls, as OPEC’s cuts are partly offset by US oil exports. Stock levels have not risen to any extreme levels, and the production cuts are due to oversupply of oil rather than declining demand. On the contrary, we believe that the low oil price will further stimulate demand and consumption.

So, in conclusion, we are pleased that the market has developed in the direction we predicted. We now look forward to an exciting 2019. And having said that, all that remains is to wish readers a merry Christmas and a happy new shipping year! 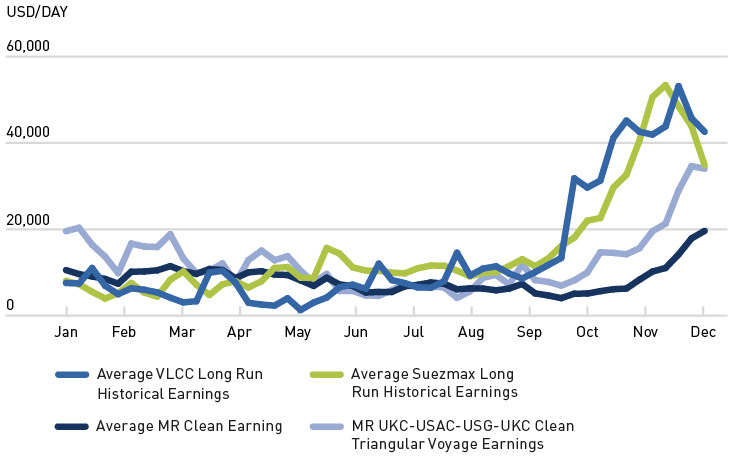