Market Update: The tanker market on a roller coaster

It is an extremely complex oil and tanker market that we are currently witnessing. In parallel with the oil consumption decline of up to 20 percent in spring as a consequence of Covid-19, we saw sky-high rates in the tanker market during April.

Since the beginning of the year, the tanker market has been characterised by sharp fluctuations both up and down. In the VLCC segment, we have seen rates commuting between $25,000-250,000/day and in the MR segment between $15,000-70,000/day.

Short but record-strong market due to stock accumulation
The low price of oil is, of course, the  driving force. From January to March, oil prices fell from $70/barrel to about $25/barrel – a decline of almost 70 percent. The low price prompted oil buyers to lighten their wallets – despite the fact that actual demand for oil fell sharply during spring.

A large proportion of the oil that has not been consumed has therefore been stored – initially onshore, near the consumption areas, and, when they become full, also in “floating storage” on board vessels. In recent weeks, we have been able to see images from different parts of the world of ships anchored, loaded with different types of oil products.

Q3 and Q4: risk of subdued market.
In April, Opec+ agreed to cut production by about 10 million barrels a day from May onwards. Several other major oil producers, including the US and Brazil, have followed suit on their own initiative and the actual total production cuts will be up to 15 million barrels of oil per day (corresponding to about 15 percent of world production) compared with production in April. The purpose is to adjust production based on the marked reduction in consumption and in doing so to also raise the price level.

In the second half of 2020, we therefore expect the combination of oil production cuts and the stock withdrawals in consuming countries to result in reduced demand for tanker transport – which in turn will result in lower rates than in the first half of the year.

2021: gradual return to “pre-corona”?
For the tanker market, the whole of 2020 is most likely to be a roller coaster year dominated by the Coronavirus. Predicting development of demand for tanker transport in 2021 is of course difficult, but we believe that gradual easings of restrictions, reopening of society, restarting of economies and massive support programmes will contribute to a faster return to the “pre-Corona” situation than many people first thought – and this applies both to oil consumption and demand for tanker transport. For example, the analysis department of Arctic Securities estimates that demand for oil will reach 95 percent as we enter 2021. 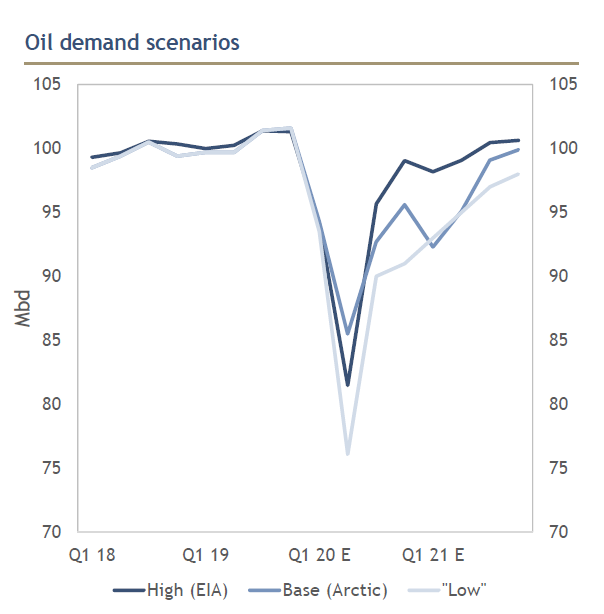 This scenario also forms the basis for the IMF’s forecast that the global economy will decline by 3 percent in 2020 and then grow by 5.8 percent in 2021. But, as I have said, the uncertainty is considerable.

What we can establish with greater certainty is that net fleet growth will be low, which is extremely positive. In May 2020, the order book for the product tanker segment was at a record low of about 7 percent of the total tanker fleet – almost half of the average for the last 10 years. Overall growth is expected to amount to 2.9 percent in 2020 and 2.2 percent in 2021. In the current situation, no new orders are being placed either, which guarantees that the low growth rate will be gradually extended.

The low net growth means that, despite major uncertainties regarding growth in the world economy, we still dare to be positive about market development in 2021. Looking at previous crises, we note that the oil market has been quick to recover on all occasions. A decline in demand has always been temporary and the markets have been quick to compensate for the loss in a short time. Let us hope, for the sake of the world economy, that this will also be the case this time.

We recently participated in the Aktiespararnas Aktiedag online company presentations. The presentation is available on our website, where we also provide a more comprehensive description of the market situation in general and production/consumption of oil in particular. Do have a look.